Skip to content
HomeDC and the Marvel Cinematic Universe: How Batman May Have Ruined DC Movies

My first attempt at writing this turned into my previous post about successful comic book movies. I didn’t intend for it to do that. I was trying to show something else. My thoughts are, in part, prompted by this article by Daniel Reynolds. Specifically, this piece:

After Christopher Nolan’s self-contained Batman trilogy ended in 2012, DC unofficially kick-started its own shared universe with 2013’s Man of Steel, directed by Zack Snyder. While it exists apart from Nolan’s trilogy, Snyder’s Superman piggybacks on its darker tone. This, it announces, is to be DC’s visual and thematic palette moving forward. While Marvel has been content with a lighter touch, DC wants to be epic and operatic. It’s painfully easy to find fault with this direction, especially given Superman’s status as the original primary colour superhero.

After touching on this point, Reynolds goes on to discuss the strategic decisions of DC in releasing their team-based movie before many of the stand-alone films. I’d rather discuss those last two sentences. While Reynolds claims that it’s “painfully easy to find fault” with DC’s approach, I don’t think it’s quite that simple.

Light and Fun – The MCU Approach

It’s probably not really fair to call this the MCU approach. DC went with this style in the Superman movies of the 70s and 80s, as well as Batman Forever, all four of which were financially successful. The first movie to be part of the Marvel Cinematic Universe was 2008’s Iron Man, long after those DC movies. The reason I’m referring to this as Marvel’s style is because they’ve stuck with it for every movie within the universe. Despite having different writers and directors, Marvel movies all have the same tone. They don’t take themselves too seriously, and they have fun with the characters, even their flaws. The term suspension of disbelief is very appropriate in these movies. Everyone goes in knowing that the events could never happen, and so they’re forgiving of flaws. This approach values entertainment over substance. This isn’t to say that the movies can’t have their serious moments, or even try to add some social commentary, just that that isn’t the focus.

Marvel’s been highly successful with this approach too. Every single movie in the Marvel Cinematic Universe has at least doubled its production budget. The least successful of them, Captain America: The First Avenger, made more than $200 million over its production budget. Even Marvel movies outside of the official Marvel Cinematic Universe follow this approach. Sam Raimi’s Spider-Man movies used it, so did the Men in Black films, the first two Fantastic 4 movies, Big Hero 6, etc. All of those movies were profitable. The approach works. Of the 44 movies based on Marvel properties, there were only 8 (at least 4 of which didn’t follow this approach) that were unprofitable, and only one didn’t make back its production budget.

Even though Marvel has had a lot of success with their approach, it makes some sense for DC to go for the darker route. The sample size is a lot smaller (DC only has 24 movies based on their properties), but historically, their light and fun movies have tanked at the box office (Superman I-III and Batman Forever being the exceptions), while their dark and serious movies thrived. Green Lantern, The Green Hornet, Batman & Robin—all of them tried to stay light and fun, and all of them bombed. Of their 24 movies, 10 were likely unprofitable.

Dark and Serious – The DC Approach

Unlike Marvel, most of DC’s success has come from their gritty movies. The Dark Knight trilogy grossed just under $2.5 billion. The gritty reboot of Superman, Man of Steel, was DC’s 3rd highest grossing film of all time. Not only that, but of the 14 movies based on DC properties that made a profit, 9 of them were dark and serious. It makes sense, in that context, to proceed with this approach for the DC movie universe. 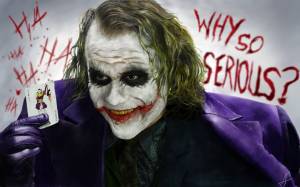 The purpose of making these movies dark is to make them seem more real. This tone is trying to minimize the suspension of disbelief. The idea is to connect what’s happening on the screen to people’s lives. If the audience feels a connection to the events of the movie, they’ll like it. One of the reasons The Dark Knight was so successful was because it touched on a lot of people’s fears about the state of the world. Heath Ledger’s Joker was an embodiment of the uncertainty people were feeling about the world they lived in, and that connection with the movie drew them in.

Which brings us to the real problem:

Dark Only Works for Batman

Batman isn’t a superhero; he doesn’t have any special powers or abilities. He’s just wealthy and obsessive. Batman’s backstory makes it really hard to create a lighthearted world to put him in. He’s a vigilante seeking vengeance for his parents’ murder. Any attempt to make it light and fun quickly turns to camp, like the 1960s Adam West version (which is awesome, since the camp is intentional) or Batman & Robin (which was so bad that the star, George Clooney, publicly apologizes for it). His is a dark story, and it needs a dark atmosphere. That’s one of the reasons that Nolan’s Dark Knight movies are so good. They take that darkness and apply it to all of Gotham, not just Batman. Tim Burton did the same thing in his Batman movies. The success of the Batman movies is what’s caused DC so many problems.

Superman, the Green Lantern, Wonder Woman, Aquaman, the Flash, etc. All of them have super powers. They’re beyond human, so a greater suspension of disbelief is required to immerse yourself in their stories. If that disbelief is stretched too far, however, it breaks the viewer out of the world. Trying to cram these unbelievable characters into a realistic world with realistic consequences is really hard to do in a two-hour movie. For Batman, it makes sense. He’s forced to deal with natural consequences because he’s just a man. Once you try and extend those consequences to superhumans, things start to fall apart.

DC’s gotten away with dark films that aren’t related to Batman, but most of them are about characters similar to him. V for Vendetta is a fantastic movie (albeit very different from the author’s intention), but its characters are regular people who live in a dystopian dictatorship and resort to terrorism and torture to affect change. Road to Perdition is about a mob enforcer who’s forced to flee. Both of these movies are about characters who are not only human, but believably human. There is very little suspension of disbelief when watching these dark movies, which is why they work.

Hope for the Future

DC has two things going for them right now that may work in their favor. The first is that the two upcoming movies, Suicide Squad and Batman v Superman, both involve Batman. The Suicide Squad is primarily composed of Batman villains, and most of them are just lunatics with no powers. The Joker, Harley Quinn, Rick Flag, Amanda Waller, and Slipknot are all just people. Even Killer Croc, El Diablo, and Boomerang could be treated similarly. Avoiding superpowers in this movie will give it a solid chance of fitting into a dark and gritty world. Batman v Superman will be more difficult, given Superman’s extraordinary abilities, but there’s hope.

The second thing that DC is doing well doesn’t have much to do with their movies, but their television series. Starting with Smallville in the early 2000s, DC has managed to produce some excellent TV series that combine extraordinary powers with a realistic world. The big advantage here is time. With a TV series, explanations and consequences can be stretched over multiple episodes, or even seasons, giving the audience time to adjust and learn about the world. The suspension of disbelief happens more gradually. Even Marvel has picked up on this, incorporating the very dark drama Daredevil into its universe. For DC, the hope is that the experience of getting these stories to work in television will bleed over into the movies. We should all hope it works out for them. DC has some fantastic characters that deserve a place on the big screen.

6 thoughts on “DC and the Marvel Cinematic Universe: How Batman May Have Ruined DC Movies”